A group of 13 children from our Worcester and Dudley offices recently enjoyed a wonderful action-packed day out at Malvern Outdoor Elements Adventure Centre, trying their hands at a challenging low ropes course, zip wires and canoeing.

The day began in the morning with the low ropes course. Before we began our instructor for the session gave everyone a thorough safety briefing which all the children listened to very attentively, and once our helmets and harnesses were firmly attached it was time to get started! The low ropes course is built amongst the trees, and despite the average height of the ropes being only 0.5m from the ground it presents plenty of obstacles including rope swings, balancing logs and nets. The children’s balance, agility and co-operation skills were thoroughly tested as they traversed the course as a group, joyfully encouraging and helping each other to get around it. All the children had a go at some element of the course, with many making it around the whole way. It was a gruelling hour and a half but everyone was feeling energised by having completed the challenge… and more than ready for a drink stop! 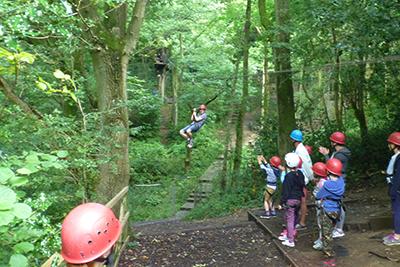 After the low ropes it was on to the zip wire – but first there was the not so small matter of getting to it! Even those in the group without a head for heights made it up the ladder into the top of the giant oak tree that serves as the start of the zip wire run, and were awarded with a big high five by the instructor. Again the children encouraged and supported each other and were respectful of each other’s achievements and of the safety rules.

Once we had all descended the tree – one way or another! – we enjoyed a relaxed lunch together, a welcome break from all the exhilaration and a chance to mentally prepare for the next activity of the day, canoeing at Pershore Riverside Centre. The journey to the river centre by minibus was loud to say the least and a sing-along even broke out at one point. It was clear the children were looking forward to their next challenge!

Upon arrival at the centre we were taken though a safety briefing by the instructors, talked through the techniques and fitted with buoyancy aids. The canoers started by practicing moving around the river before taking part in some games organised by the instructors. It was a good job that everyone was dressed for a swim and wearing lifejackets because there were a few, let’s just say, ‘unplanned entries’ into the water including Granville! (You can imagine the hilarity and laughter that provoked!) 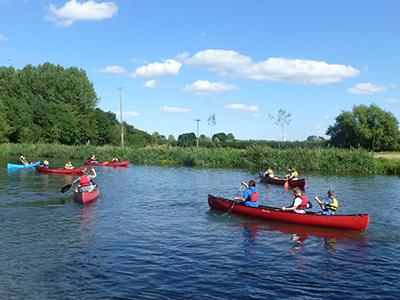