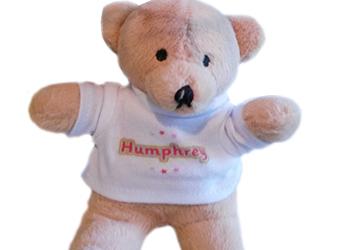 Tracey Lewis, Family Support Worker at our Dudley office has shared this heartwarming account of how our FFC bear Humphrey and our Welcome Box are working their magic to help children feel safe, make sense of their situation and, most importantly, to simply be children again:

“I carried out a welcome visit a few weeks ago to a child who had only been in care for 4 weeks.

In his notes I read that he had just turned 13 and having spoken to his carers was told that he was very street wise and had an unhealthy interest in guns and ammunition. I kept this in mind when putting his welcome box together but still included our Humphrey bear and his story book and one of our Project Linus quilts amongst lots of other things.

The boy in question was very grateful for all the information and gifts I had put In the box and we explored them all together. He lifted Humphrey from the box and asked ‘what’s this?!’ I explained that all our children get a Humphrey bear no matter their age and he smiled and held onto the bear. He told me he had a bear upstairs on his bed and what his name was. He asked me if he could give Humphrey a name that went better with his own bear’s name and after a few suggestion he decided on a name that was also the name of his grandad. 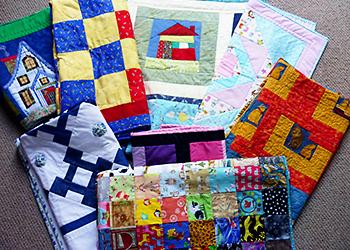 I then sat with this 13 year old street wise young man who loves guns and we read the Humphrey story book together. He admitted at this point that he struggles with reading and writing and so the simple text was easier for him to read and understand.

Afterwards we took his box up to his room and we introduced Humphrey to his bear, we even made them shake hands, and he placed them very carefully on his bed together. This boy had not unpacked completely still having bags lined up along the bedroom wall with his belongings in. As we talked he told me that he had found out that a friend of his from school was also in care and had been for a long time but he had had no idea! He said they talked to each other about their situation and helped each other.

I saw the foster carer of this boy a few days later and he told me that he had loved his quilt and laid it out on his bed. He also told me that he had seen the boy leaving for school a day or two after my visit with his Humphrey Bear and the story book in hand. When he asked him what he was doing he explained that he was taking it in to school to show his friend that is also in care as it had really helped him to understand things and he wanted to help his friend!

I think this is such an important story and highlights that no matter what our children have been through that are just that - 'children’ - and we should always remember that, no matter how they behave or what we read about them. (I also feel this proves that our Humphrey is doing a fantastic job!!)

If this wonderful story has inspired you, and you would like to find out more about becoming a foster carer and being part of the great work to help children feel safe and be children again, then we’d love to hear from you. Call us on 0800 321 3230 or visit our website and request a Fostering Information Pack.