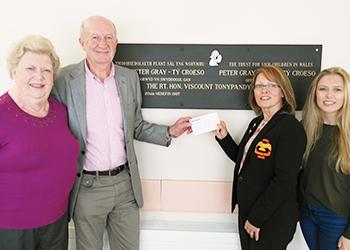 Family Fostercare's very own Jeannette Watkins spearheaded a program of fundraising events during her term as Lady Captain at her local golf club last year, raising an impressive £1,833.15 for charity "Trust for Sick Children in Wales".

Jeannette, pictured here with her daughter, was extremely proud to be able to present the cheque on behalf of St Mellons Golf Club to Huw Thomas and Natalie Watson from the charity.

The charity provides support services to sick children and their parents throughout Wales, with one of its most notable achievements being raising £160,000 for the creation of a medically-equipped family room at the new children's hospital in the grounds of the University Hospital for Wales in Cardiff. So a very worthwhile beneficiary of the funds raised.

Jeannette chose the charity and then planned and lead a number of fundraising events as part of her role as Lady Captain of St Mellons Golf Club near Cardiff last year. And don't for a minute think this was all glittering parties and summer BBQs - much of the money raised was from Jeannette running the gruelling Cardiff Half Marathon! Chwarae teg i ti Jeannette!