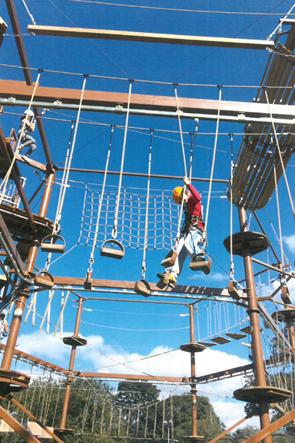 FFC Cumbria took a participation day for looked after children and carers own children to entirely new heights with a high-adrenaline highropes challenge.

Although the topic of the day – consultation forms - might have been a bit dull, the tree-tops challenge at the end of it was anything but!

We think it’s fair to say, nobody enjoys filling in forms, and Family Fostercare’s looked after children and foster carers own children are no exception! They have told us in past participation days that they hate filling in the forms, so the aim of the participation day organised by the team in Cumbria on 26th August was to discuss their ideas on how we could make form-filling more interesting.

The session produced plenty of useful ideas and feedback, many of which we have incorporated into the new interactive consultation forms designed for use on tablets that we developed in-house.

With the dull stuff out of the way, it was time for a bit of excitement, and what could be better than a highropes challenge amongst the trees at Bitts Park! At the safety briefing before the challenge the children all communicated well and listened attentively. Despite some early nerves everybody worked well together to all complete the challenge. What a fantastic achievement!